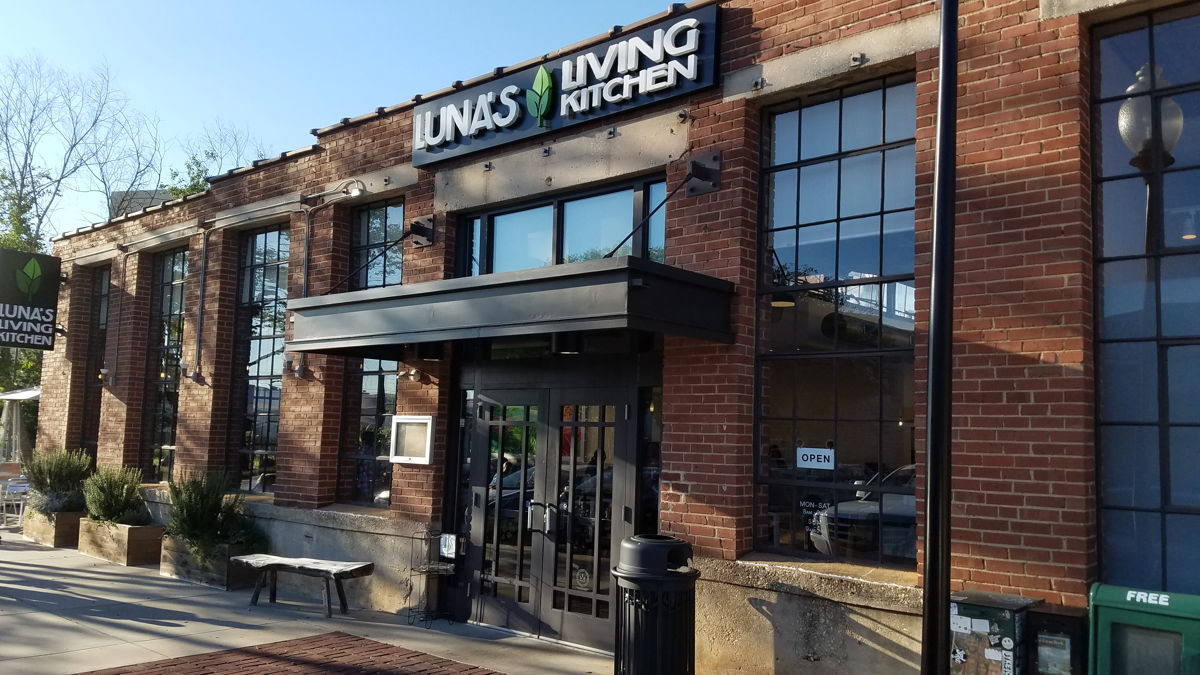 A modern-rustic vibe feels clean and fresh in this vegan and mostly raw eatery. Living Kitchen has several locations, each with a slightly different decor, but they share the same menu. We stopped in for dinner around 7 and were greeted warmly. The restaurant was busy, but not full. Our waitress, Rachel was extremely helpful, knew the menu well and was able to steer us to a good selection of dishes. 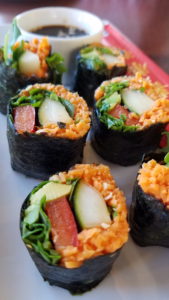 We ended up ordering the Sweet Potato Sushi Roll for an appetizer, the Manicotti and BBQ Sliders for entrees and we finished with the Lemon-Berry Cheesecake.

The sushi roll was very good, it’s made with riced sweet potato instead of actual rice and served with a slightly spicy dipping sauce that really compliments the flavors in the roll. Julia didn’t care much for the raw sweet potato which, being raw, had a little starchiness to it, but she also dissected it, whereas I ate it as a a whole composition. So, suggesting on this is to eat it all together. The flavors and textures balance well.

The Manicotti is  not actually pasta, but rather thinly sliced zucchini rolled around a soft cashew cheese filling. It’s topped with a raw tomato basil sauce that to us tasted more like a pesto with tomato than a marinara. The flavor was good, but the filling was so soft that trying to cut the zucchini forced the filling to ooze out and made this hard to eat. We substituted a Cesar salad for the arugula salad that was supposed to come with the manicotti. The salad was very well done with a Brazil nut cheese that had an excellent taste and texture. On this plate we both liked the salad better than the Manicotti. 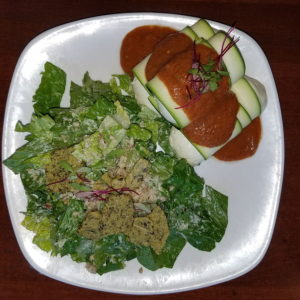 Next up – the BBQ Sliders. These are made from oyster mushrooms which work very well for their slight chew and umami flavor. Julia normally avoids mushrooms and actually ate a whole one of these, so that’s saying a lot! These were very well executed with the bbq and coleslaw creating a good balance of savory, sweet, and tangy. When you eat here, we highly recommend the sliders. 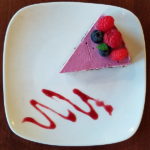 Lemon-Berry Cheesecake wrapped up our meal at Living Kitchen and was very refreshing. In keeping with the theme of the restaurant, the cheesecake is a mostly raw version. Made from cashew and coconut, the berry and lemon flavors are presented as layers. The crust was very good, and though maybe a bit more of an ice-cream sensation than a cheesecake, we really enjoyed this dessert overall.

If you’re in Charlotte, or passing through, do yourself a favor and check out this creative and tasty vegan spot. You can find them online here.

Sorry, the comment form is closed at this time.